I have an issue for which I need some advice. My Trek Madone bike was stolen right on Main Street in Santa Monica August 27th. It was locked, they cut through it while I was in a restaurant with my mom getting a quick bite on our way home from a ride. Let’s just leave it at that re: the locking of the bike. I reported the bike stolen w/ Santa Monica PD and to Bike Index.

So I get a text a month ago from a wonderful person from this community with a pic and link to a post and lo and behold, my bike is on sale on OfferUp from a dude in Gardena, and I immediately flag it and tell the detective in charge of my case that I found it!! I contacted the Santa Monica PD and flagged it on OfferUp. OfferUp then contacted me and asked me for all pertinent info and that they would work with the PD, but I have a feeling that when they flagged the guy’s post, they likely freaked him out and he might’ve gotten rid of it or…I have no idea.

I have the receipt for the bike, the serial number, I know it’s mine because there is a distinguishing mark on the bike, a 10 inch portion of the rear stay that I had repaired a few weeks after I got the bike and got in an accident. I can see it, plain as day, in the picture on the OfferUp post. I also contacted the repair shop where I got it fixed in Santa Monica 6 years ago. I called them. They have the invoice, but no pics associated with it…which is highly unusual, they said, but it HAS happened with several of their repair pics, since they switched over their invoicing system when they moved from SM to Tennessee a few years ago.

After a lot of back and forth, The detective that Santa Monica PD says he can’t get a search warrant unless I have a pic w me and the bike showing that distinguishing mark which would prove beyond a doubt that the bike is in fact, mine. Well, I don’t take that many pics in the first place and when I have, I almost always frame the pic so that it’s the upper half of my body, which would only show the top of the bike and not the rear stay towards the bottom…of course.

What seems odd to me is that it isn’t enough for the police to say “Here’s the receipt this guy has for the bike. We need to see the serial number. Oh look, it matches, great, here’s your bike back, Mr. Jablon.” But apparently it isn’t.

So with all of this evidence, the SM PD STILL says they can’t do anything about it, that they can ASK the guy to let them see the bike, but that they can’t knock on his door and legally ask to see the bike…even though he claims to have ID’ed the seller!

I have since spoken to a close friend who is an attorney and he contacted the SMPD and awaiting a reply.

Can someone please enlighten me as to why this seemingly obvious course of action is not being followed?

I also included a time-stamped pic from right after I bought the bike but BEFORE the damage was done to it, which seems to be the point of contention.

My last question is…what if there hadn’t been ANY damage to the bike? Then we’d have absolutely NO cause to match the serial number?? That seems insane to me!!! 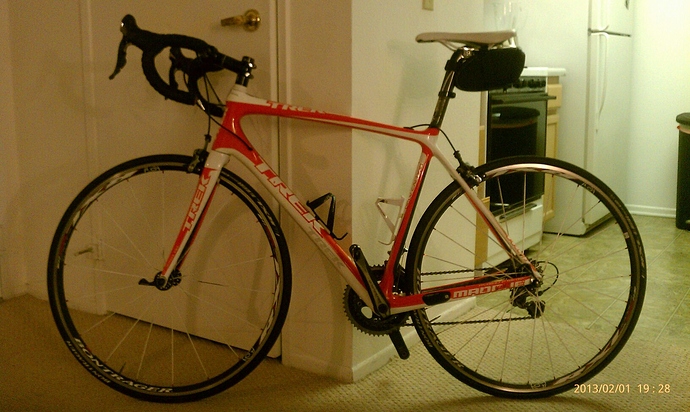 Wow…not ONE response from anyone?? Strange…ok.