When I lived in Chicago, I rode my bike everywhere. It was a non-decision - it is bar none crazy to not commute in Chicago via bike, if you are able.

The CTA (Chicago's public transit) is about as efficient as a system with a daily ridership of some 1,000,000 riders can be. When driving your own car you have to take into account all of the $50+ parking tickets you risk. And driving a car is no faster than public transit and in fact, slower than bikes, once you're into the labyrinth of the city.

Bike on the Lakefront Path: 33 mins

Getting anywhere in Chicago takes a long time, it doesn't matter which method of transport you use. But riding a bike gets you where you're going no slower than any other form of transport, and you get there on your own terms, without waiting in traffic or having to stand on the bus sandwiched between a bunch of people and holding a loop above your head as you lurch to and fro and hope you don't bite the bus floor.

My bike commute to work took about 13 minutes. Taking the train, with a transfer to a bus, took about 25 minutes, on a good day. Driving was pretty quick, but someone rear-ended me and totaled my '98 sedan after a few months in Chicago, though I hadn't been driving it much. I was taking the train a lot instead of driving or riding because for a month or two I thought the train was cool and urban, which it kinda is. And it was summer and it was hot and I hate to sweat and then put on day clothes for class. It was a little easier riding to work because the ride was short, and I worked in a bike shop basement, so looking nice wasn't really an issue except for the ghost of the former tenant who had lived in that basement and who I saw a couple of times lurking among the hanging bikes.

Commuting in the Chicago winter turned out to be my favorite kind of commuting. 1) No one else is out. 2) Fenders. 3) Cutting fresh tracks in the snow. 4) It's immensely exhilarating to ride in single digits and get toasty inside your jacket, arriving at your destination refreshed and with rosy cheeks. Night commuting was pretty fun too.

I rode a beater. I bought it as a freshman in college and dragged it around, locking it outside every night for four years. I don't know if I ever replaced the chain. I was missing a spoke on the front wheel. I brought it with me to Chicago, where I quickly learned that locking your bike outside was not a thing and a surefire way to get even the beateriest of rides stolen. My bike was everything a true Chicago commuter was not: it had a kickback brake, an internally-geared 3-speed hub, and these big wide curly bars. Once I started riding it to class, I realized I needed to make some changes because 1) my knees hurt, and 2) everyone in Chicago rode a fixed gear '80s Schwinn with a threaded headset and bullhorn or drop bars. I was way uncool. And because I was working in a shop I had access to people and tools that would help me modify my bike into a sick new ride. I soon also realized the difference between functional and cool. 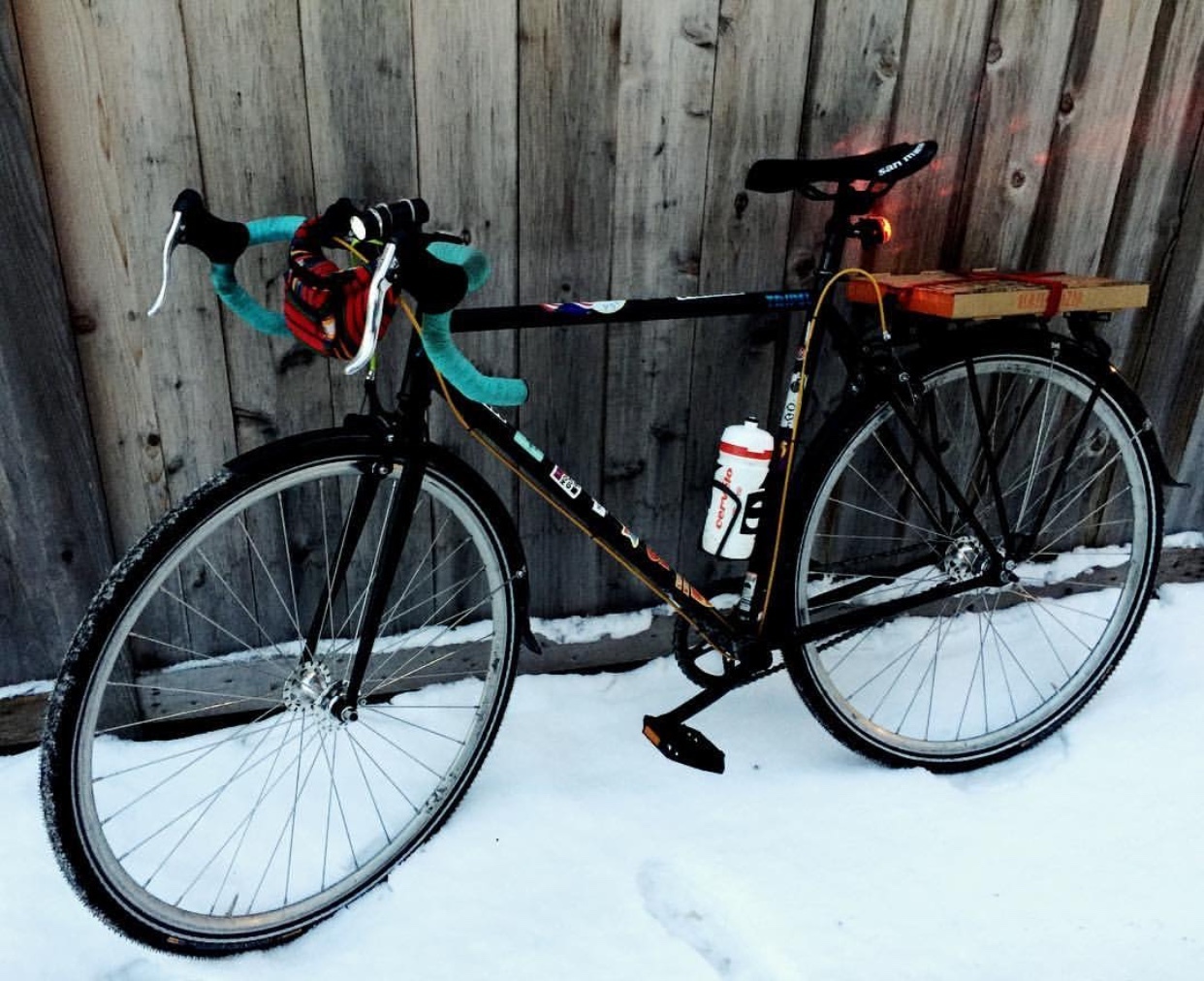 So I drilled two holes into the steel frame to mount brakes, added some custom fenders (what fenders don't end up becoming a custom job?), put on a freewheel and some drop bars, progressively added stickers to the frame, and joined commuterville. My co-worker had this slick Nature Boy with disc brakes, but whatever. We commuted all over. Some of my fondest memories of Chicago involve rolling around town with my co-workers, rain or shine, warm or cold, sometimes we raced, we pulled each other along, and sometimes I would be alone, headphones in, getting from point A to point B, despite the headwind or snow.

I'm ashamed to say that I stopped commuting once I started racing bikes. An extra 16 mile commute was a not insignificant addition to the 40ish miles I was already riding daily, especially on a bike that was heavy and slow. I had to buy a car to race all over the country, so I abandoned my bike and the train and became another angry perpetrator of car culture.

I now live in North Carolina. Getting anywhere in my small city takes maybe 30 minutes by bike at the very very most. It's not Chicago flat, but it's also not San Francisco hilly. I hadn't ridden my commuter in ages. It wouldn't have worked in NC with just one speed, or with its immense weight. I almost cried of happiness when a customer of my Chicago bike shop took the bike for his son. After five years of ownership, it was hard to see it go, wondering if it would be ridden again. But I did want to revitalize my commuterness, living in a place where most car trips would take less than 10 minutes. I built up a 10-speed Soma road frame with 32 tires and 42 bars and those rad pedals that are flat on one side and clipless on the other. And then I just never rode it. 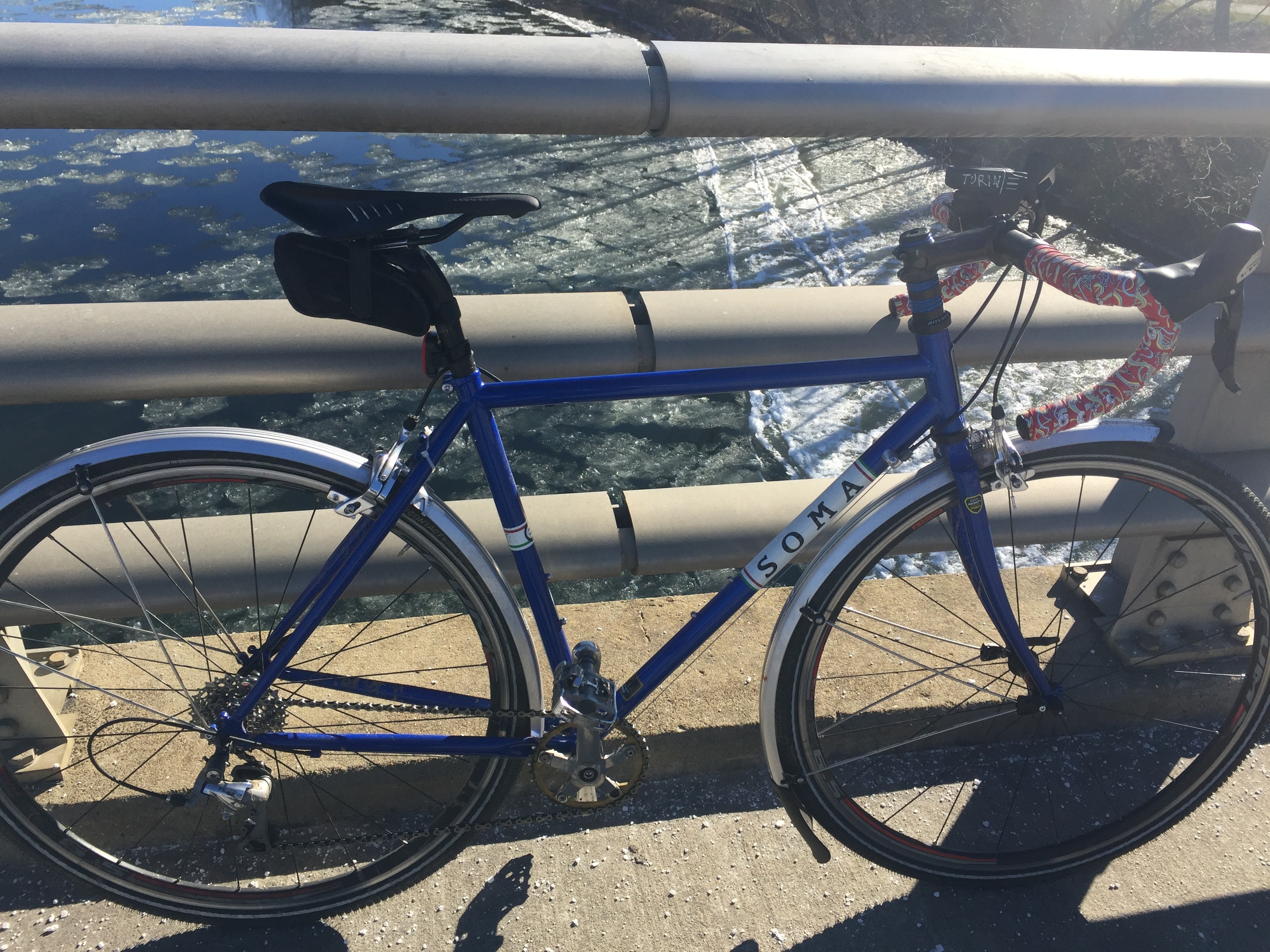 When I returned to Chicago for Christmas and met up with my old friends and co-workers, I drove to dinner, and they rode. Of course, they got there at the same time as me, performed the efficient lock-up ritual, and we went inside. I felt kind of gross, like an 'other', or like, well, a lazy person. And so I made it my New Year's resolution to revitalize the commute. After eight days, it's felt pretty good.

My new bike is still heavy, considering that I now have hills to go up and I spend much of my riding time on much lighter carbon race bikes. I'm spoiled. I purchased too wide of a bottom bracket, so the chainline is too extreme and I drop my chain all the time. It took me 5 hours to dremel and attach the fenders to fit under the brakes I bought. But what is a perfect commuter? It's going to be outside all the time, in the rain and snow and salt, and it has to withstand being locked metal-on-metal. People are going to try to - and they might succeed in - stealing the bike. I still get sweaty when it's above 36 degrees. I have to be alert for texting drivers at all times (can anyone else believe that this is a problem? it's insane that anyone would try to look at little letters while hurling through space at many miles per hour). And no one really commutes by bike here. It's weird. But I am committed to upholding this resolution.

The biggest impetus for the change was a series of car problems that cost me upwards of $1,000 in December. I lost my damn mind. I just graduated from school and have student loans. Wasting money on something I don't absolutely need is asinine. I wanted to be as far away from cars as possible. I work from home, meaning that I don't rely on my bike to take me where I need to be every day, but I do occasionally work elsewhere or like, go to yoga. And the best way to get there, is to strap on my shoes and a pack and just go there. Same goes for riding on the trails. In the past, I have driven to those trails to ride. The Bike Snob posted an article about why we should ride to rides because are you kidding me.

What I love most about commuting is the agency I have. Even if I'm not moving as fast as a car, I'm always moving. I'm not stuck at stoplights in a big machine that is spewing out noxious gases even though it's literally doing nothing. I can take quicker routes through the city to the places I am going. I don't have to pay to leave my big noxious machine in a spot, which is basically paying a premium on something I've already bought. I don't mind public transit, but I'm totally at the whim of the driver and the traffic and I need to be in control so it's not the most fun for me. If you need any more convincing that our reliance on cars is completely INSANE, give this article by the Atlantic a read. Or look at cycling infrastructure and ridership in Europe.

In some ways, my friends inadvertently peer-pressured me into revitalizing the commute. But idk hey, I think it's valid if it gets me back out there. As someone who is a militant recycler, a waste minimalist, bike aficionado, and outdoor enthusiast, it made approximately no sense for me to not ride my bike around town. Even if you aren't those things, try commuting by bike, and see if you like it. I understand sometimes people need cars. And not commuting by bike doesn't make you lazy. But while we cannot deny the comfort and convenience of cars, we have to wonder what the heck we are doing when cars are unequivocally destroying the planet and killing us left and right. So here'e to upholding a New Year's resolution. I expect all of y'all to hold me to it.

This is a companion discussion topic for the original entry at https://bikeindex.org/news/new-years-resolution-diaries-day-8-commuting?locale=nl